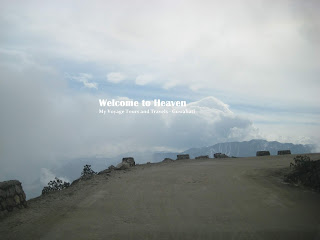 India is a land of incredible landscape ranging from North to South, East to West. Arunachal Pradesh  which lies in the North Eastern region of India is one such state with immense natural beauty and God gifted landscape. Tawang in Arunachal Pradesh lies in the foothills of the Himalayas near Indo China border. The scenic beauty on the way to Tawang is mesmerizing. Due to lack of infrastructure, this region was not well known to tourist until few years.

I was planning to visit tawang but never got an opportunity. When my friend Dev from Delhi showed interest, I welcomed him and we made our maiden trip to Tawang in the month of March, and it is perhaps the best time of the year to visit Arunachal Pradesh. Me being a tour operator from Guwahati gave us an edge with more knowledge. We went in a Toyota Innova SUV vehicle which was very comfortable. We started off from Guwahati and we headed to Tezpur, about 4 hours distance from Guwahati, which is one of the beautiful township in Assam on the way to Tawang. My cousin is from Tezpur so we stayed over at his place. In fact my uncle was more than happy to show us Tezpur and the famous tourist places such as Chitra Lekha Udyan, Agnigarh Park, Mahavairabh Temple and many such places.  Aunt made dinner and we went off to bed as we have to go for Bomdila next morning. 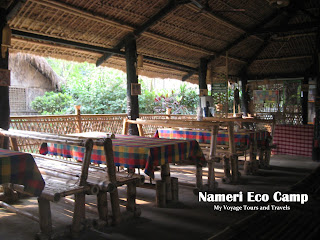 Early morning after a cup of tea and some biscuits, we insisted not to have breakfast so early and we left for Bomdila at about 06:00 hours. We stopped at Nameri National Park for some breakfast. Nameri is popular for people who love to go for trekking and river rafting. They have tents with inbuilt toilets for tourist to enjoy a natural ambience in the middle of the Nameri Tiger Reserve. Then we proceed to Bhalukpong gate where you need to show your permits at the check post which were made in Guwahati few days prior. These permits requirements are different for indian nationals and foreign nationals. As we crossed Bhalukpong gate, it was dark due to the cloudy weather. Further we continued we realised how zig zag the roads are getting, how trickier the roads are becoming. It is absolutely important for anyone to have a very experienced driver, someone who knows these roads very well. Otherwise your trip will become a nightmare. 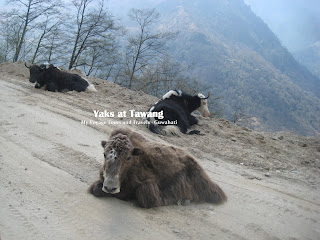 Our trip continued and we saw how beautiful Arunachal Pradesh is, with the mountain on one side and the valley on the other side. It became so dark my camera was flashing at 12 noon and we were in the highway. After Bhalukpong we reached Sessa Orchaderium, both of us were so excited with the scenery, we were speechless. Only our cameras were doing the talking. In between there are construction going on but then again it becomes ok. We took out our sweaters as the temperatures dropped.  I stopped counting how many small waterfalls we saw on the way. Then we saw the famous Nag Mandir whose picture we have in my office at Guwahati.  Finally after about 6 hours drive from Tezpur, we arrived at Bomdila. We checked-in at the Hotel Tsepal Yongjam where we had our prior reservation. Hotel staff were very hospitable and rooms were also good. We knew that we cannot expect too much in this part of the country as this region is not developed. This is why a good tour operator comes handy. We got the deluxe room and staff were very professional.

I tried to see if there is anything worthwhile visiting at Bomdila after couple of hours of rest, but it gets dark very early, nearly 4:30 pm it was sunset. My friend was feeling very cold so he stayed indoors. I walked to the local market there and saw plenty of sweaters, mufflers, hand gloves, monkey caps inner and the likes on sale. I bought one woolen cap for myself to keep me warm. 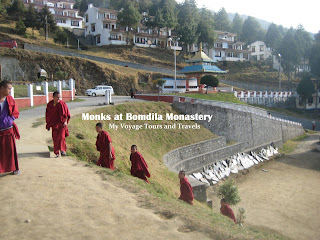 Next morning we woke up with the early sunrise at about 5ish. Breakfast was good at the Hotel. Checked out from hotel and we visited the Bomdila Monastery. Early morning sunshine the weather was nice. It was an absolute delight to be there, pollution free environment, amazing sight from the top of the mountains overseeing Bomdilla town. Inside the monastery, photography was prohibited.

Thereafter, we proceed to Tawang. Our driver was very professional, Our chauffer was very professional. He comes in this Tawang belt on a regular basis. He was telling us his experience with tourist and it was really interesting. The further we go the steeper the roads become, and slower the speed of the vehicle. Weather is getting cold with each mile we drive. Sweaters have come out of the handbags. Since morning we have crossed several animals that we don't see in the city such as the yaks, mountain horses and so on. Vehicle follow the rules very carefully in such hilly areas as the roads are narrow. If a vehicle is coming upward, the vehicle going down will stop 30 yards before and let it pass before going ahead. These kind of travelling takes a long time to reach it's destination which otherwise is not a very long distance. The kind of natural beauty Arunachal Pradesh has to offer, we were so mesmerised. The most fascinating part about the Tawang Trip is the journey. 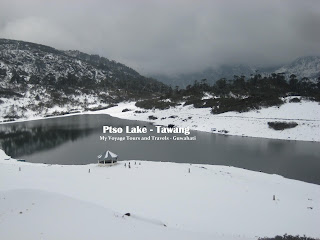 We stopped at the famous Jaswant Garh where an Indian army soldier fought bravely with the Chinese soldiers during the 1962 war alone for several hours before finally giving up his life for the country. There we were offered Tea and Samosa (snacks) since it's so cold over there. We were freezing in the cold and the hot tea came as a relief. Then we saw the Sela Pass. The sign says 13700 feet above sea level which marks our entry into Tawang.

Due to some traffic issues, we arrived at about 3 pm. We could not help but stop at every possible locations on the way for photographs. This is an once in a lifetime opportunity for my friend and he did not want to waste it without stopping at the beautiful places and clicking some pictures. Our chauffeur told us we must go for the Bumla Pass (near Indo China border) and Sanguster Lake tour tomorrow. This is one of the important tourist destination. It takes few hours to reach there and few hours to drive back. Some people loves to go, and others like to take it easy since they are driving for so many days at a stretch. Evening at about 5 pm we reached our hotel Gayki  Khanzang, one of the oldest hotel at Tawang. We took the suite room at the basement. These hotels are not like hotels in cities. And staff are also very simple. However, they manage to provide the service possible in these interior places. One should not expect too much luxury in these remote place as it will be impossible to have the same facilities as in big cities. At night it was very cold, but the room heater kept the room temperature comfortable. TV also provided very limited channels. Constant power failure is also a problem, could not enjoy the movie but there was generator back up and after a while, I fell asleep.

Next day after breakfast, we went for sightseeing. As we were on our way to Sangaster Lake (commonly known as Madhuri Lake) the Indian army at the gate stopped and told us not to go any further. Due to heavy snowfall all the routes to Madhuri Lake and Bumla Pass are closed for tourist. Therefore we continued with our Tawang local sightseeing covering Tawang Monasteries and War Memorial. The War memorial was consisted of all the soldiers who died in the 1962 war. They were from different parts of the country, mostly Northern India. Entire Tawang is having 1960 Indo China war influence and the war memorial have the olden days weapons used in the war. Tawang Monastery is one of the oldest and largest monastery in Asia. It has a museum that has  monuments which dates back to 10th centenary. You will see many  unique scriptures, hunting tools, masks in this monastery museum. The monastery is very peaceful and is maintained well by the monks inside the monastery.

Since we could not visit Bumla Pass and Sangster Lake, we decided to go to Ptso Lake. Here we enjoyed the snow. We could play with snow as we have never seen snow before. I was making tiny snow man. Dev managed to get a cuppa and I never felt the excitement for a cuppa in my life like I felt that day in the snow. 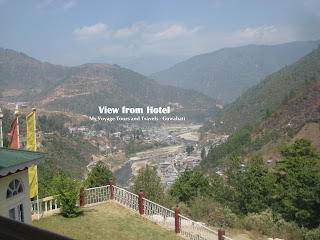 We had lunch at a small road side restaurant where we enjoyed noodles as there was not much options at that time. Then we took a walk along the hilly roads of Tawang which was also enjoyable. Both of us were so tired with the journey, we ordered room service for dinner and slept early.

I met a tourist guide who also happens to have his own vehicles. He was coming from Zemethang Valley which is few hours from Tawang. He gives his vehicles on rent for tourists to visit Bumla Pass, Sangster Lake, Ptso lake etc.

Next day the sun was bright and weather was clear. It was a perfect sunny day to take photographs. I kept taking photos from our moving vehicle. I was lucky to get plenty of awesome photographs. Later we reached Dirang and checked-in at Hotel Pemaling. I was in love with Dirang. Dirang is such a lovely township with beautiful landscape. Our hotel room at Dirang was overlooking the mountains. Beautiful view from the balcony. I found the book "The monk who sold his Ferrari" at the hotel. It was the best thing that happened and I could spent my time in peace. My friend does not like cold places and he kept to himself most of the tour. Next morning, after breakfast, we moved to Tezpur and came by the same road. It took us almost 6 hours to reach Tezpur. We had lunch at Bhalukpong and made a overnight stay at Tezpur at my cousins. With so much travelling for lst 4-5 days, we did not go any other palce. stayed indoors ate homemade food which my aunt cooked. Great hospitality at Tezpur. And next day comes the homestretch. We returned to Guwahati after breakfast around 9ish and reached by lunch time.